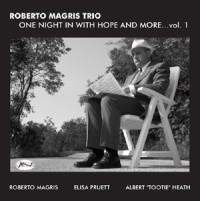 Roberto Magris - One Night In With Hope and More (JMood Records)
Relentless painistic explorer Roberto Magris has been putting out records at a pretty brisk clip - this disc follows his "Morgan Rewind Vol 1" tribute project (for which Vol. 2 has already been completed), and he has other projects either ready to hit or in advanced work.
In the interim, he's turned to the varied works of bop-Era pianists-composers and, as with all his projects, this record deftly combines a burnished technique with the trademark joie de vivre and seeming abandon that Italian-born Magris injects into all his playing.
Things start off in suitably joyous fashion with Elmo Hope's "Happy Hour" and the programme also takes in Tadd Dameron's gorgeous "If You Could See Me Now" and -expectedly, one supposes - Ellington's "I Didn't Know About You".
But its on Andrew Hill's " agile an angular "East 9th Street" that the group (bassist Elisha Pruett and Tootie Heath, returning form the Morgan project, join Magris)  burns brightest, though Mal Waldron's "Fire Waltz" is also beautifully rendered.
The album again smartly includes an audio notebook featuring JMood's Paul Collins expounding on the selections and the rationale. But even without this is an altogether delightful project, a timely reminder of why jazz is such good-time music. 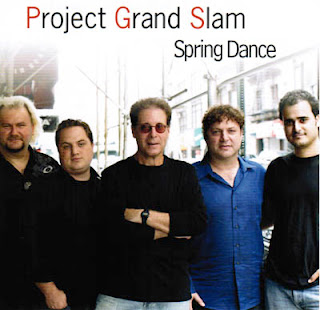 Project Grand Slam - Spring Dance (Cakewalk Records)
The fellows who make up project Grand Slam are each veterans of the live and recorded music scene, and the band took a further boost when five tracks from their previous disc, "Play" were featured on the NBC series "Lipstick Jungle".
The title track leads off this record and proves an engaging intro to those, like this writer, who are new to the group. They really get cookin' on the next track, "Joe Z" a tribute to late weather Report keyboard whiz Joe Zawinul
New Zealand vocalist Joye Hennessy handily breaks up the testosterone, putting in a sterling performance on "Remember" but especially on the Hollies' 70s classic "He Ain't Heavy, He's My Brother". Like that title, this group ain't heavy, in the nicest of ways. This is smooth jazz-pop that will enrapture the smooth fan without enraging the purist. 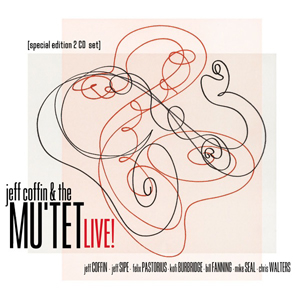 have developed a truly distinctive sound, whether with Bela Fleck or as a leader with his Mu'tet, as this compilation demonstrates. Funky and worldly and unrestrained, but at the same time imbued with a certain elegance, that certain seeking nature.

The group is set to release another studio album, Into The Air, but this 2-disc compilation, offered via Coffin's website (www.jeffcoffin.com) should fill in quite nicely till that one hits.
Posted by Michael A. D. Edwards at 12:41 PM