welcome aboard th Jazz Bus  for 2K11. Thanks to all our friends, contacts  and well-wishers for your support through 2010, and we intend to do even greater work this year as we advance improvised music. Our review bag today features the latest from soprano sax explorer,  Jane Ira Bloom, some freshly "reFused" sound from Heavy Tin, new Orleans 'force of nature' Trombone Shorty's "Backatown" and guitarist Chris Crocco and his aptly named Fluid Trio Visitors to the Monterery Jazz fest this past fall would have experienced the boundless energy and razor-sharp musicianship of Troy 'Trombone Shorty' Anderson. Now, Anderson, and his co-horts have attempted to bottle some of that "We do it all" spirit in this disc, and happily, little has been lost in the process. The infectious grooves are all there, undiluted and even if the madcap motions and shifts of the live show are not fully replicated in the sound, there's enough for the listener to put himself vicariously in the performance space. Anderson very nearly does it all - multiple instruments, and vocals on some tracks, but he does get some help, notably from rocker Lenny Kravitz on 'Something Beautiful". The instrumental tracks generally outshine the vocal one, but its all shot through with the leader's irrepressible optimism. This si good-time music for anytime. 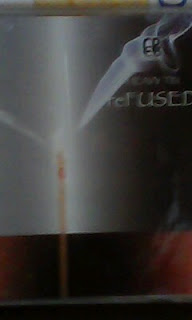 Provocateurs BR Pearson on piano and Izzy Reel (bass) have added Viktor Lorak on drums to further round out their bop-funk explorations, and the difference can be heard on steamrolling tracks like "Hammer Dat!" and "Bop Bomb" Which is not to say that the group doesn't know how to ease up on the gas: "Sweet Beet" begins in classic ballad style, with Pearson's gently contemplative yet expansive pianisms and Lorak's subtle brush work, while "Simple Saviour" could have formed part of the soundtrack of any contemporary Oscar-worthy drama.

But its clear that reFused is meant  to convey the fun of the music, even the brief liner notes betray a sly sense of humour. The intention is to impart a feel-good vibe to the listener, but on the band's own terms, without pandering.

In that, they have succeeded handsomely. Jane Ira Bloom is hardly the first jazz artist to reference the cosmos, but she's one of the cleverest.

Her latest exploration of inner and outer space is chock full of re-imaginings and re-constitutions of existing conventions. Early case in point: "Life on Cloud 8" presents a striking contrast to the blissful ignorance of "Cloud 9" and presents instead a strutting, struggling, even somewhat menacing kind of drudgery. Bloom is well aided in this by her collaborators- Mark Helias on bass, drummer Bobby Previte and Dawn Clement on piano and Fender Rhodes.
'Freud's Convertible" suggests a stroll rather than a drive, but one in which the iconic psychoanalyst is attentive to the varied stimuli of his environment;Bloom's soprano suggests waves of thoughts and ideas - thorny issues being confronted, if not resolved. "Rooftops Speak Dreams" conjures up lazy nights of fascination, gazing at the stars from some preferred vantage point.

Of particular note is the final track, and the only cover, "I Could Have Danced All Night". Yanking it from the heady, romantic delirium of "My Fair Lady" Bloom's solo rendition instead sounds like the wishful thinking of a dance marathon loser, or maybe the wistful recollections of one who can no longer dance at all. 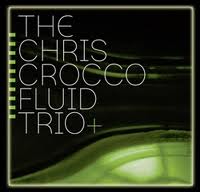 The Chris Crocco Fluid Trio +
Guitarist Chris Crocco has devoted his career thus far to the quest for authentic expression - ie, he has sought to let his music speak to whatever his life experiences may be at the particular time.

Such phrases may seem lofty, but in various musical combinations, Crocco has made his explorations palpable, and this latest iteration is no exception, boasting both impressive compositions and instrumental dynamism, as one might expect from the presence of George Garzone, Peter Slavov and Francisco Mela.

The songs vary in both tempo (fast to slow) and pitch (loud to
soft) and more importantly, their open-ended structures leave plenty of room for
all the players to fill. Indeed, Crocco's highest virtue as a leader may be in his innate
sense of when to push forward with his largely single-line musings and when to hang back and
allow his excellent partners to take his ideas forward. The drumming of Mela in particular, is a treat, hopping across the set one moment, pounding authoritatively the next and near silent another moment.

The Fluid Trio + is testament to the sonic benefits that come from focussing on the integrity of musical interplay in the moment; one doesn't waste any energy trying to avoid cliches - they simply have no room to enter.
Posted by Michael A. D. Edwards at 10:57 AM No comments: